Michael has coached and inspired several generations of young ultimate athletes since becoming Head of Ultimate Programs at Paideia School in Atlanta in 1994, with dozens of players he coached going on to leading roles on national championship teams, as well as receiving Callahan/Pufahl/Farricker awards in recognition for their spirited play. Countless others picked up a love for the game, and many have gone on to give back to the sport by serving in coaching or administrative roles. In addition to being the head coach for the Paideia Middle School (coed) and Paideia High School (varsity boys), which were High School National Champions in 2001 and 2002, he founded Paideia Ultimate Summer Camp for nine-14 year-old children in 1997.

On the national stage, Michael volunteered as National Youth Director of the UPA from 1999-2001 and was on the Youth Advisory Council from 2002-2005, which established long-range plans for youth development; designed a coach training and certification program (now known as CDP); and created a new full-time Director of Youth Development position. He was the U-19 U.S. Open National Team Coach (with Tiina Booth in 1998, 2000, 2004, and sole head coach in 2006), winning three gold medals and one bronze, and was head coach of the U-19 YCC Champion ATLiens in 2013. He was also co-author of “Essential Ultimate: Coaching, Teaching, Playing” published in 2008. 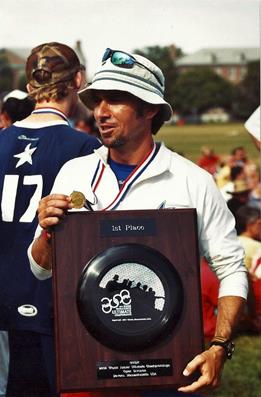 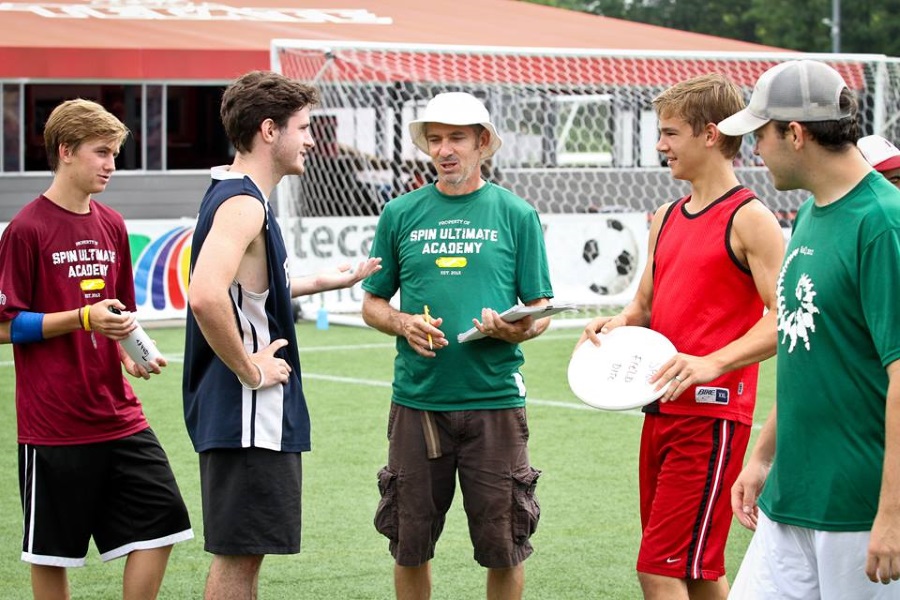 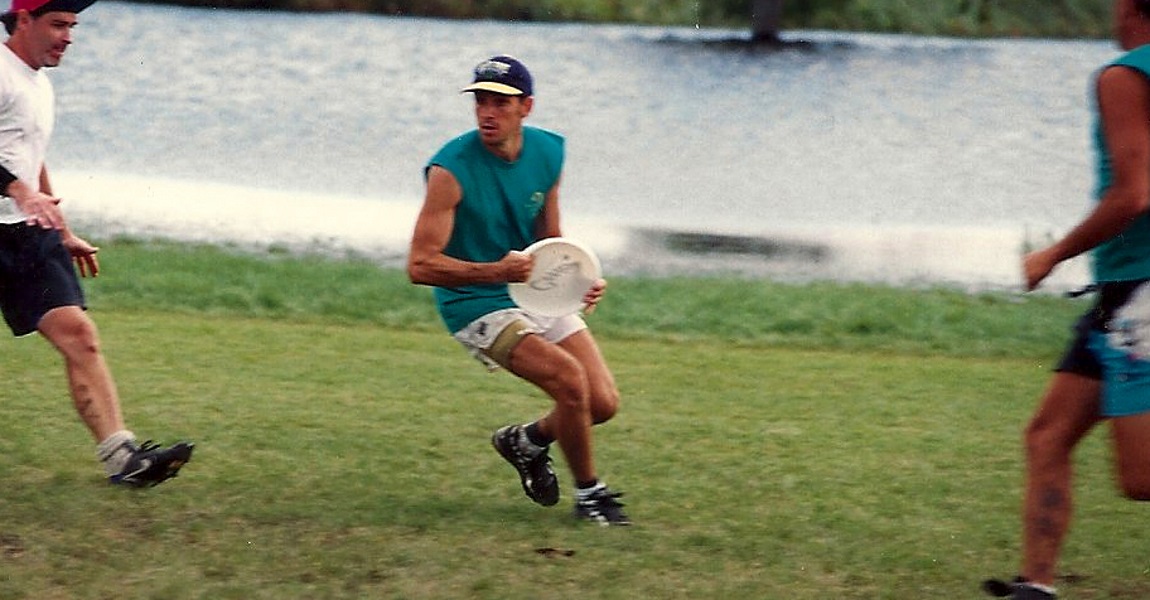 Describe your major contributions to the growth and development of ultimate.

As the volunteer National Youth Director (UPA) 1999-2002, I made presentations at annual board meetings on the critical need for the players’ organization to recognize and embrace its role in fostering the future of the sport by guiding the direction of youth development.  As a coach and longtime advocate for youth ultimate, I put forward a call to action to the UPA to get out in front of the exploding youth scene and intensify and expand efforts in youth outreach. I stressed that the organization’s role must include creating a full-time staff position dedicated solely to this focus, as well as allocating funds in the annual budget for comprehensive youth outreach efforts. As a result, the board voted to move forward in this direction while also setting aside funding for youth outreach initiatives and hiring the first Director of Youth Programs (Kyle Weisbrod).

I helped form and serve on the Youth Advisory Council (UPA) 2002-2005 that developed long-range plans for youth development, including the formation and design of a coach training and certification program (now known as CDP). The committee also created and wrote the scope of duties for the UPA’s new full time Director of Youth Development position. I was involved in the interview process of the final candidates, leading to the Weisbrod hiring, and continued to serve in an ongoing advisory role for subsequent youth directors.

I was a member of the original Coaching Corps Committee (along with Tiina Booth, Joe Bisignano, Bubba Dennison, John Sandahl and Kyle Weisbrod) that met in 2003 to conceive of and author the Coaching Certification Program and curriculum. The program, which launched a year later in 2004, has contributed significantly to the increase in qualified coaches nationally and to the overall growth and improvement of youth participation, which in turn has led to elevated high school, college and club play.

Along with Tiina Booth, I co-authored the book Essential Ultimate: Teaching, Coaching, Playing to provide a much-needed resource for the growing ultimate community. Coaches, parents, teachers and youth recreation leaders (such as Boys and Girls Club of America), as well as players themselves were starving for a resource that would help them learn the game and start a program at their school or in their community.

As an outreach effort and to better effectively identify the top youth talent, Tiina and I pushed USA Ultimate to move toward holding full-fledged tryout camps for our U-20 national teams. This change allowed more kids to experience top-end coaching and best practices in skill-building, drills and play, which they could then take back to their programs. The intention was as much about identifying and broadening our national search as it was about building ultimate in more youth committees. The change in approach to tryouts also helped provide a training ground for developing future national youth coaches such as Ben Van Heuvelen, Chase Sparling-Beckley, Pauline (Lauterbach) Ruegg, Miranda (Roth) Knowles, Leila Tunnell, Jody Avirgan, Martin Aguilera, Kyle Weisbrod, Moses Rifkin, George Stubbs and Sam O’Brien, among several others.

My contributions helped stabilize, stimulate and steer the direction of youth development nationally, providing increased support, structure and opportunities for more children to discover and learn the sport. The programs and outreach efforts designed – for coaches, kids, organizers and parents – have led to a more systematic and standardized approach to teaching ultimate, as well as accelerated advances in skill acquisition. Also, I cannot emphasize enough that, to me, just as critical as teaching how to play was establishing high standards for Spirit of the Game, and I strove to ensure that at every level I was involved – in youth summer camps with the teams I coached at Paideia, with my YCC squads, in national tryout camps, in Essential Ultimate and firmly written into the curriculum of the national coaching certification program.

Another area I believe has impacted the game on a broad level is the multitude of Paideia School alums who have contributed to countless programs and communities on many levels as players, captains, camp counselors, coaches, organizers, writers and even staff members and board members at USA Ultimate. Paideia ultimate players, coaches and parents continue to serve as a positive influence in the growth the game, and have done so for over 25 years. This broad spectrum of influence is a testament to my passion for building the sport at the youth level and promoting the spirit of the game.

USA Ultimate (formerly UPA) needed to be in the forefront of the youth movement, and I was adamant that the time was now. As a testament to my belief, I volunteered as National Youth Director in the hopes of pushing things forward. As an organization, we were able to accomplish so much and saw considerable change from 1999-2004. Significant gains were evident and served a rapidly growing – and starving – population of future players and their advocates. The impact of the investment in youth ultimate during this time period has been substantial at all levels of the sport.

Why did you do what you did for UPA/USA Ultimate?

I first started playing disc sports in the mid-70’s: freestyle, MTA, TRC, disc golf, double disc court and ultimate. However, it was ultimate that took the cake. It was “It” for me, combining all the elements of sports that I loved most – sprinting, cutting, jumping, diving and, of course, throwing. Throwing stood out as something completely different to me; I was totally captivated when throwing discs. On top of that, the fact that we, as high school kids, were completely in charge of our games was so exhilarating. It is hard to explain just how empowering that was. I discovered ultimate in 1977 and played my first game against Columbia High School in Tamaques Park in Westfield, N.J. We got stomped 24-6, and I was hooked! As the years passed, I wanted to teach as many kids as I could about the game. That desire only grew stronger as I aged, and it became clear that passing on that magic and passion would become, for me, a life-long pursuit.

It is difficult to pinpoint when my peak years as a contributor were, as I am still actively in the ring. After 40 years as a player and now nearly 30 as a contributor, I admittedly have begun to scale back my year-round commitments to the sport. But, I continue to enjoy coaching middle and high school teams at Paideia, running my summer camps and lending support to newer programs in Atlanta and throughout the state of Georgia, as well as staying in touch with alums and coaching colleagues around the country, learning and offering support in any way I can.

I have directed and helped organize tournaments in the Atlanta metro area since 1994, including HS Terminus and the Metro Middle School Tournament (both now run by AFDC). I also co-founded the Paideia Cup.

Co-wrote (with Tiina Booth) Essential Ultimate, an extensive user’s guide to the sport which was published by Human Kinetics in 2008. Tiina and I believe our book has given many the foundation and tools needed to start, grow and maintain programs at their schools and in their communities. To me, teaching the solid fundamentals of the game has always been critical, a fact which is evidenced in the countless alums who have gone on to make a significant impact in college and club ultimate, widely known for their strong base of fundamentals. The primary purpose and hope of Essential Ultimate was to offer that same foundation to its readers.

I believe my work over nearly 30 years has contributed to the growth and enhancement of the sport as we know it today. Many others have given so much to the sport, and I consider myself blessed to be counted among them, delighted and proud to have offered all I could for it has enriched my life beyond belief.

Spirit of the Game has always been a staple of what I’ve taught in my camps and certainly throughout the Paideia program’s history (on the U-20 national and YCC teams I coached, as well). While, of course, we are proud of the many tournament titles we have captured through the years, we are every bit as proud of the numerous SOTG trophies we have earned. In addition to teaching strong, fundamental disc skills and developing players with a high ultimate I.Q., I believe the Paideia program’s strong emphasis on honoring the game and one another, and conducting ourselves with integrity, are key reasons a school as small as Paideia has produced six Callahan recipients, a Farricker and a Pufahl winner, countless captains of college, club and U.S. national teams, as well as an abundance of coaches, organizers, leaders and activists in our sport.

Recognizing that playing ultimate made me not only a stronger athlete, but also, more significantly, challenged me to be a better person, my passion has been to share that profound gift with every player I encounter. The heart of my coaching (and teaching) is character formation. Plain and simple, ultimate has given me an unbelievable platform to build relationships, teach integrity and shape not just skilled athletes, but respectful contributing citizens. Looking back, I am profoundly grateful ultimate has given me the opportunity to connect with and be shaped by so many fine people, and I am humbled and honored to have shared the journey.