David is known for his undying spirit, fiery leadership, and explosive play. He had a reputation as a diminutive powerhouse that could not be stopped on the ground or in the air. Fiercely loyal to his team and teammates, David fully committed his time and energy to building, nurturing and leading any team he was on.

To beat his teams, opponents knew they had to shut him down and contend with the fact that he would never give in. The “fire hydrant that never stopped running” led three different teams to multiple appearances in Nationals, reaching five semifinals and two finals, and brought home a World Club Championship in 1995.

David formed and led numerous top-flight teams on both coasts between 1978 and 1995, including The Jam, The Hostages, East Bay Firestorm, and Double Happiness. David developed an approach to team composition and play that was described as “flow and chemistry over talent.” He built every team this way – often the maestro of his team’s mayhem, he was nothing without the great play of his valued teammates thought brought out the best in him.

Impacted deeply by Spirit of the Game, David founded Ultimate Peace in 2008, with a vision of using the sport of Ultimate and SOTG as tools for peace and bridge-building in conflict zones. The organization serves many hundreds of youth in the Middle East and is expanding to multiple regions around the world, including Colombia. He lives in San Anselmo Ca. with his wife Nancy and two sons, and still loves to play a few tournaments a year. 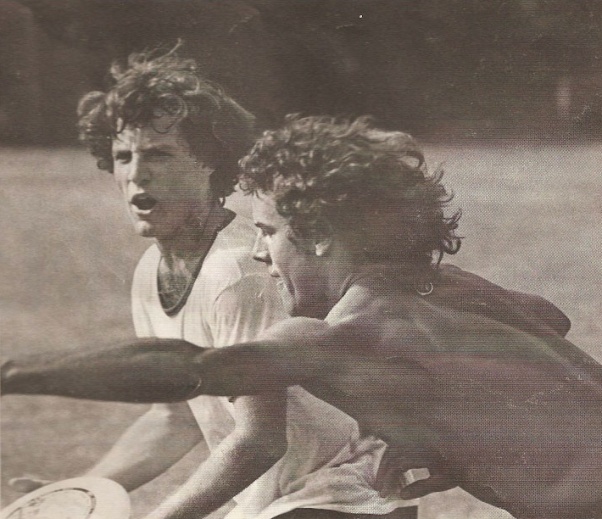 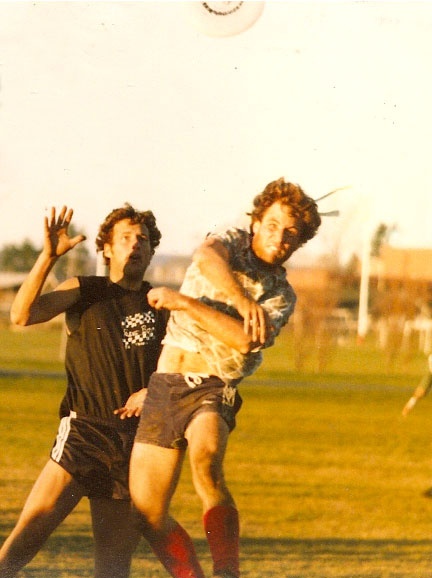 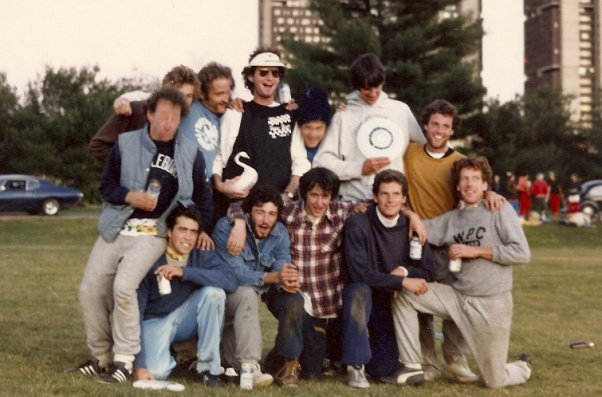 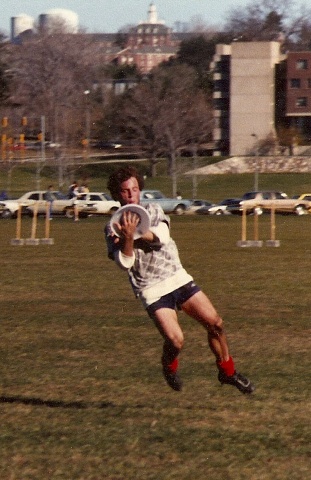 I played handler much of the time but loved to go long, especially when it was obvious I was becoming predictable in the backfield. As I got older, I worked on my defensive game and played defensive stopper and handler on the transition. I loved this role and played it up until I retired in 1995 with Double Happiness.

My major accomplishments were all around starting teams that excelled. The first team I started, The Jam, was a bunch of rag-tag guys that had no idea how to play Ultimate, but we became one of the top teams in the West Coast in 1979 in just one year. I was 20 years old, and I never stopped forming teams. I am definitely most proud of my accomplishments as a captain and team-builder. As the leader (or one of the leaders) and architect of my teams, I worked overtime to make them positive, tight knit, intense, and much of the time, a major contender and winner.

Winning tournaments was always a thrill, but so was getting far with an overachieving team. Winning WFDF Club Worlds in England in 1995 was unforgettable, especially beating NY in the semis and DoG in the finals, though I am just as proud of taking the Hostages to the semis of Nationals, because we were a small group (13) of underdogs.

Personally, I think I had some great games over the years, making plays that I definitely remember as surprising as to what my body would agree to do, but really, like one of my teammates said years ago while basking in the glow of a tournament triumph, “There is nothing like a team victory!” Ultimate has never been about personal feats to me, unlike the way I view other team sports like Basketball and soccer. This is one reason I love the sport so much.

Growing up I was a competitive gymnast, tennis player, track and field athlete, and cross country runner. I competed constantly in team sports too, especially in soccer, basketball, and baseball. But once I played Ultimate, I never looked back.

In the early 90’s I was fortunate to be invited to coach in Japan for two summers with Mike O’Dowd and other greats. This was a highlight of my career, and I had a vision of teaching Ultimate around the world, though I had no idea where or how. When I retired in 1995, I formed the Matza Balls, a Jewish All-star team. We played one tournament a year, Fools West, and it allowed me to continue playing and stay connected to Ultimate. We won 7 Fools tournaments, beating some very good club teams (Sockeye, Condors) and got a reputation that led to getting an invitation from Israel to play in their first tournament and coach youth and adults. 11 of us went, had a blast teaching Jewish Israelis, but realized there could be unlimited potential impact if we were to use Ultimate as a tool for bridging culture gaps among Arabs and Jews in the region. Ultimate Peace was born from this experience, and this is my proudest accomplishment as an Ultimate player and leader, by far.

I like to think I was known for being a constant force that had to be dealt with by the opponents. Speed, aggressive throws, big hops, and fiery intensity on defense were my main assets, and I am pretty sure opponents who knew me expected me to always play my hardest. If I stood apart I think it was because when I got going, really on a roll, I was very hard to stop. More than that, my energy was contagious – I could get my team riled up quickly and raise their level of play when they were slacking or unfocused. I was a little guy, but I know opponents considered me threatening and strategized on how to contain me. In my early 20’s I was also known for my occasional outbursts – it took me a number of years to drop bad habits encouraged by a lifetime of mainstream sports to grow up as an Ultimate player. In my early 30’s, I think I was acknowledged as a top player who also possessed strong spirit and exemplary leadership qualities. Of this I am extremely proud.

What was your role with the best that you played on?

I guess you’d have to consider Double Happiness the best team I’d ever played on in terms of results, though the Hostages were probably even better when it came to team unity and making the most out of what we had. Either way, I played the same overall role: inspirational teammate, motivational leader, and sparkplug on the field.

There were many that I remember vividly, but the first most memorable game was when we (the Hostages) played the Rude Boy in the 1981 Regional Finals. The Rude Boys were the favorites and everyone thought they were the obvious team from our region that would go to Nationals. With one team going, the pressure was on our smaller, much less hyped team to alter fate. What I loved was our collective disdain for the expectation of our demise, and how we turned our outrage into results. We came out storming, threw a totally new zone at them, refused to turn the disc over, and left the Rude Boys shell-shocked at half time, 6-2 (games were timed). They never recovered and the second half was a celebration of all we had worked on and accomplished as a team –  unity, strategy, brotherhood, and excellence. The victory gave us the confidence to keep wining over the next year, including Fools, Easterns and beyond. I believe it was one of my best personal games to that point, as it also was for all my teammates, especially Steve Gustafson, Tommy Conlon, Steve Smith, Jim Levine, and Neal Lischner – awesome performances all.

In my early 20’s with the Jam and the Hostages when I was in my athletic prime I felt I was unstoppable. I surprised myself by how fast I could run, how far I could throw, high I could jump, especially when I was knew my team was counting on me or when I was downright angry. I threw my body around with great success and I am certain 8 years of gymnastics proved useful. But I am not sure those were necessarily my most potent years as a player.

Playing in [my] early 30’s, I brought maturity to my decision-making, leadership, and consistent on-the-field conduct that I think made me an essential ingredient in the success of East Bay Firestorm and Double Happiness. Even without 100% of the physicality I’d had in my 20’s, I preserved pretty well, and my impact was undeniable. I was on the starting D line and one of the three captains when I retired. One of my proudest moments came as I heard a rival Sockeye player say to his teammate, hearing I was retiring after we’d won Worlds: “There goes Barkan – they say Double Happiness can’t do it without him.” Interestingly, they didn’t make nationals the next year.

I didn’t think I was, as I assumed winning multiple national championships was a prerequisite. Plus there are so many great players on my own teams and others, that I have to ask, “why me?” Yet I suppose if you look at what the HoF Peers value in the survey results, namely being feared, athleticism, being a charismatic leader, and playing with spirit, I am a pretty solid candidate. I played hard and fair and went toe

to toe with many of the great group of Hall of Famers inducted thus far, holding my own and more. Today I am humbled and truly honored to be among them.