Tom “Timba” D’Urso played Ultimate with unbridled enthusiasm as a fierce defender and un-guardable receiver. As a team leader with Glassboro, he was a key player on the first two UPA Club Championship teams in 1979 and 1980. Timba was the heart and soul of the motivational pre-game rituals of the “Boro”. He also appeared in the finals with Spinoffs and the semifinals with Titanic, demonstrating his ability to fit in and contribute to these very talented teams. As noted by Timba, a great player is awesome to have on a team but a great teammate is far more important. 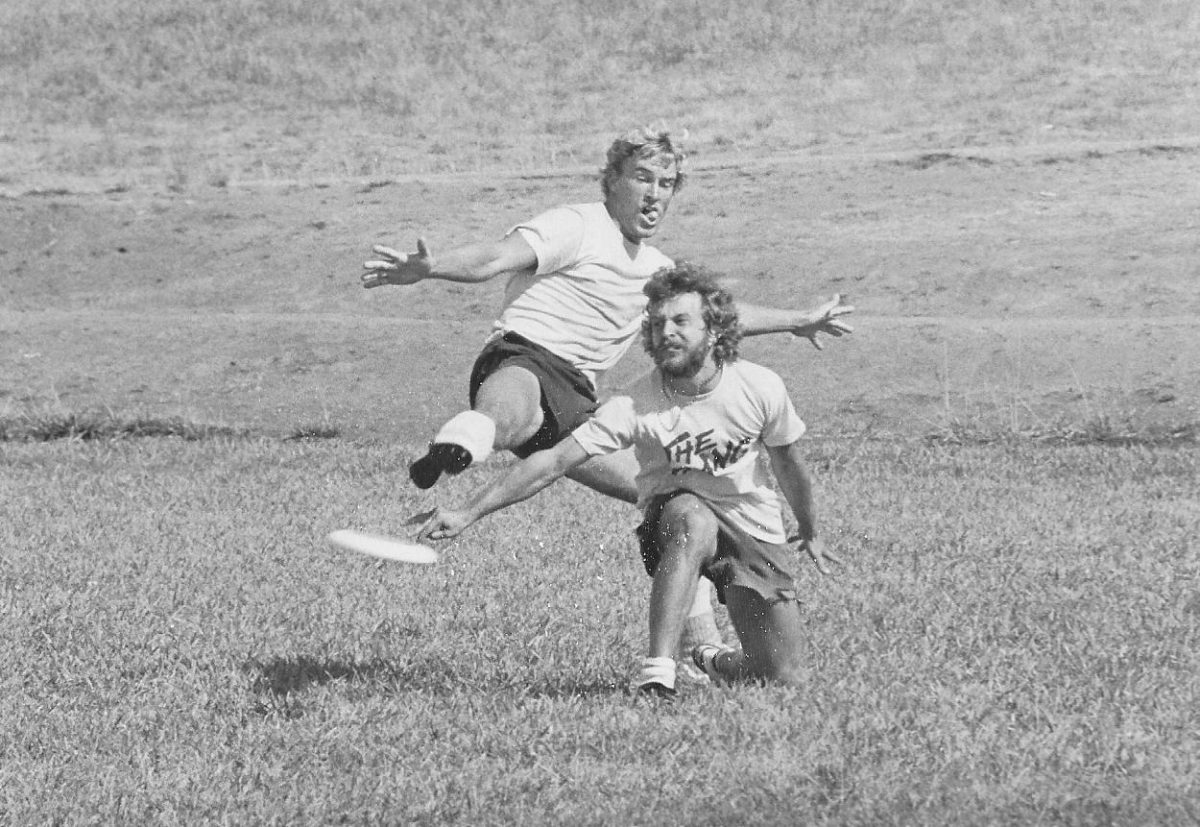 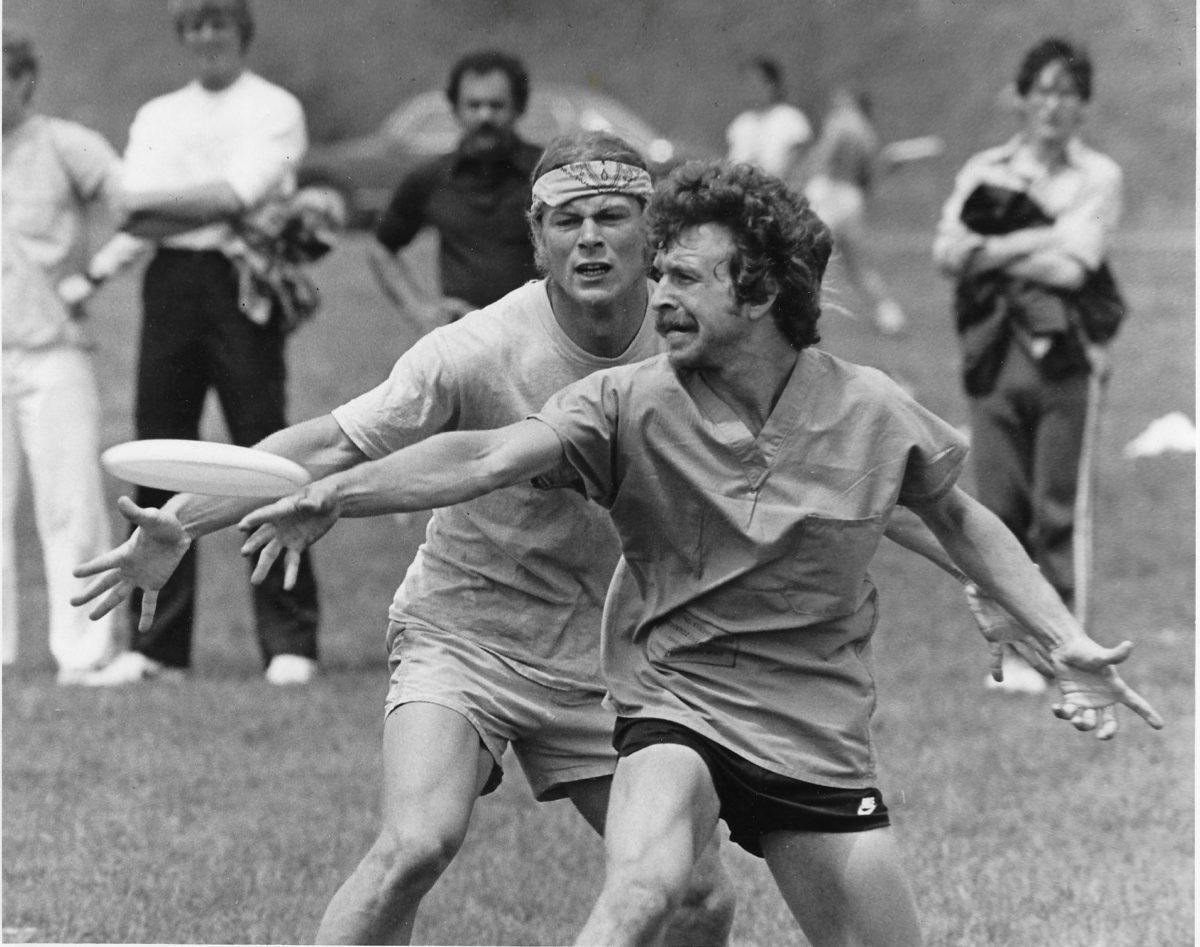 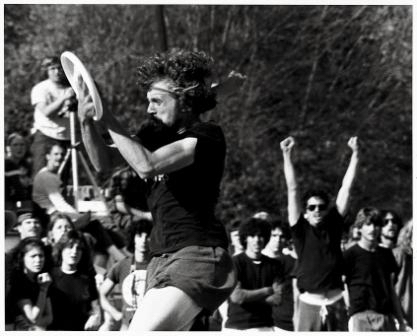 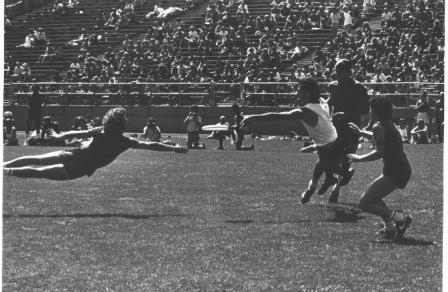 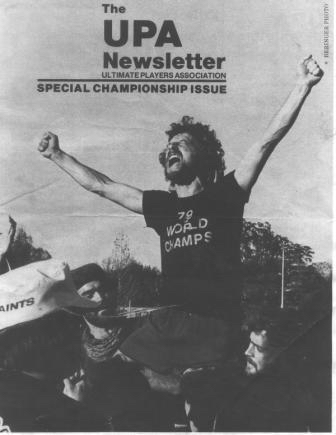 Early in my career I was designated as an up man in the Boro’s tight zone. This required me to be ahead of the disc on offense and predominately be a goal scorer. This suited my darting, relentless style of play. As my throwing skills improved, I became a handler of the disc. My mid range passing was pin-point. The emphasis was always on completing the next pass. Hence my game and roles I played evolved through my career.

Describe your major accomplishments - both as a teammate and an individual player?

I felt my teammates respected me for my style of play. They knew that each game I would leave it all out on the field. My teammates knew they could count on me when we needed to reach down for a little extra. I was an inspirational leader. I had the ability to motivate the people around me. I often led us in singing and dancing and just plain silly pre-game rituals. This became a trademark in the Glassboro success story. The Boro was infamous for being a type of team with plenty of psych. Upon moving to San Diego it was a little difficult to get the West Coasters to realize the value of these goofy chants. However, one of my most rewarding accomplishments was how the Spinoffs followed my lead. A great player is awesome to have on a team. Yet, a great teammate is far more important on any squad. I believe I made the people around me better players.

Individual goals were really unimportant to me. I really believe I was a “for the team player.” However, one of my most memorable accomplishment games was the 1979 National Finals. We had lost to the two-time champs Condors in pool play by nine goals two days earlier. However on that Memorial Day weekend in the National finals, the Boro was not going to be denied. I played an outstanding game. Defensively I consistently keep pressure on the disc. This made it difficult for the superior passing Condors to cut through our zone. We scored 18 goals that day. In that game, I had six goals and threw for six more. I felt I was one of the major cogs in that one point victory. This was the steppingstone to probably my greatest accomplishment. That being the lifetime relationships I have with my Boro teammates. To this day, so many years later, we are as tight a unit as we ever were. For that I am eternally grateful.

Another goal I accomplished which is not to be taken lightly is my ability to play on top-notch teams in three different regions. This displays in me the ability to conform and be flexible. As I stated I always tried to put the team first. Fitting in on some high-powered teams as the new guy showed not only what I was willing to do for the team, but also the respect I had built up through my reputation in my new teammates. Finally, it would be an honor to be elected into the Hall. I put a lot of time and energy into Ultimate Frisbee and to be selected by a committee of former players would be the ultimate distinction as a player.

I feel I was truly one of the elite players of my era. People knew when they went into a game I was playing in they were in for a tiring afternoon. I always played all out when on the field. Also everyone knew that off the field I was a person that did not let the fame go to his head. Offensively, I had the ability to get open against just about anyone. I accepted the challenge of drawing the opponents’ best defenders. I held it as a compliment and thrived on the opportunity to succeed. My passing prowess was outstanding. I always first looked to complete the pass. I never was concerned about how far the pass was thrown or being the person to throw a goal. I learned early completed passes deflate teams. Although small in statue, I felt I was a giant on the field. I never backed down or gave in to someone taller than I when going up for the disc. For someone 5’8’’ I could get up.

More importantly than my performance on the field, I epitomized the ultimate spirit of the game. This was an attitude that came naturally to me. People saw the enjoyment I got out of playing and competing. My teammates fed off that and opponents respected and marveled at it. During my era of playing, I feel I was held throughout the ultimate community in a very positive light. So in summary, what set me apart from many players was not only how I played the game inside the lines but my attitudes towards the game outside of the lines.

The role I played on the 1980 National title team was both rewarding and difficult. It was my first year out of college and into teaching. There was a major turnover in personal from the 1979 to the 1980 Glassboro team. The 1980 needed stability and leaders to show them the proper way to play the game. I provided this because I was one of a few holdovers fro m the 1979 Championship Team. I not only had to lead on the field but, had many administrative responsibilities. It was very difficult organizing 50 college kids onto a bus for the Nationals in Atlanta. Winning the title and getting my picture on the cover of the UPA magazine made it all worth it. I believe this was the year I became national know as one of the better players around.

I would be remiss if I did not mention the role I played on the 1983 San Diego Spinoffs. I had just moved there from NJ in the summer of 1983. The players on that team knew I was moving out there. Initially, my reputation as a winner on the ultimate circuit carried me. Day by day my new teammates began gaining more respect for my game. The talent was already in place in San Diego when I arrived. However, this team needed to learn how to win. The players needed someone to support them in a positive way. The y embraced me in a way that allowed me to give them a path to victory. They needed the confidence as a team to succeed. The Condors and the Flying Circus had dominated the West Coast region to that point. I believe through positive modeling of hard word and no nonsense attitude, I provided this team with the leadership it ne eded to get them over the top. To the credit of the Spinoffs they allowed me to come in and lead. This was a team that had never made it out of the western regional prior to 1983 or to my knowledge ever since. I feel I provided the final push they needed to achieve. That we did, as we made it to the National Finals that year. To this day I feel that was one of my crowning moments in Ultimate.

What year was the peak of your career?

It is difficult to nail down one year as my peak year. However, as I reflect on the 1979-1980 era, I would say these are the years I came into my own on the Ultimate circuit. I was nursed and modeled during my early years at the Boro (1977-78). I was taught to p lay your role for the benefit of the team. Relentless defensive pressure and endless movement on offensive were my early trademarks. Hence I was predominantly a goal scorer. As my skills improved, much more responsibility on the offensive end was handed to me. During both of the national finals game, I drew the other team’s best defensive players and embraced that challenge. I’m proud of the way I played in both championship games.

I believe I am worthy or the Ultimate Hall of Fame for a number of reasons. First, I played the game with an unbridled enthusiasm. I loved being out there competing. Also, everyone who watched me play knew I was having a blast out on the field. I believe I emulated the Ultimate spirit. During this era, most players knew who I was and I felt like I handled the notoriety without becoming caught up in the fame. Secondly, the teams I played for were all very successful. We won back- to- back national championships in 1979 and 1980 at Glassboro State. Aside from winning it all, the teams after the Boro I played on finished in the final four five additional times. I was able to relocate to the west coast and then to the northeast and fit in on some very talented teams. Establishing yourself in three different regions took some doing. It meant you had to keep your ego in check. I know I was able to accomplish that goal. Therefore I feel I would be a good fit for the Ultimate Hall of Fame. 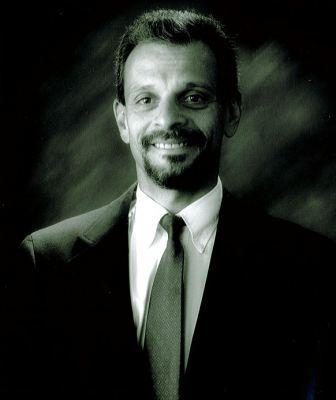