Gwen captained Stanford Superfly for two seasons, leading to the finals both years – culminating with the 2003 national championship in her senior year. That fall, she contributed to Fury’s national title and was selected as captain for the team the following year, leading Fury to its first WFDF medal with a bronze at WUGC 2004. Gwen was also part of Fury’s strategy committee for the 2006 and 2007 championship teams. She then captained the team in 2008 when Fury pulled off the elusive double-peak to win Worlds and a national title, earning the team spirit award at Nationals along the way. With Fury, Gwen finished as a semi-finalist twice, finalist once, and national champion four times and was a major contributor to establishing Fury as the dominant team in the division for years. During her 8-year tenure on Fury, Gwen was voted by the team as Rookie of the Year (2001), Offensive MVP (2003), Defensive MVP (2005), and Overall MVP (2007). She was also Fury’s nominee for the Kathy Pufahl spirit award in 2007. As her coach, Matty Tsang, puts it, “Gwen is the best deep-deep to ever play the game”. And on a team that relied heavily on in-game adjustments and crafty junk defenses, Gwen was often the most important player on their D line.

In 2009, Gwen was selected for the World Games team, was voted a captain, and helped the team earn a gold medal. She had been an alternate for Team USA in 2005.

Of the 7 years Gwen played with Riot, she was co-captain for 5 seasons—three of which were as captain-coach. She led the team to four semi-finals finishes and three finals at Nationals in that stretch. She also captained the team to a WUCC gold medal in 2014. While playing with Riot, Gwen won the Kathy Pufahl award and was voted the women’s division Club MVP in 2012. After retiring from playing club in 2015, Gwen went on to coach Riot and she continued as the team’s head coach through the 2021 season.

Gwen lives in Seattle with her husband, Will Henry, and their two little boys. 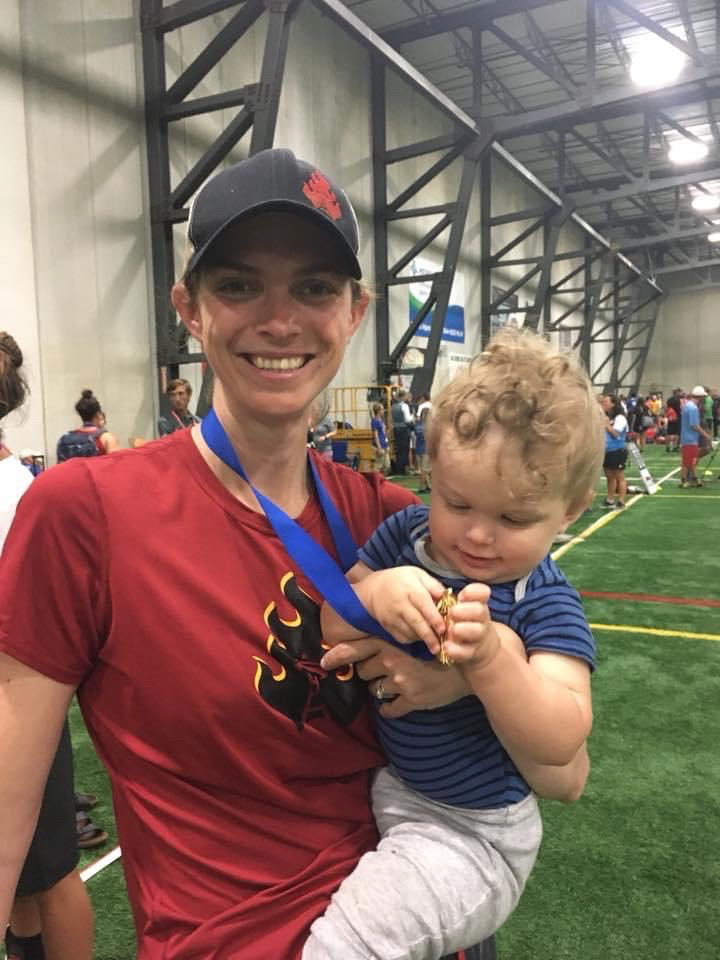 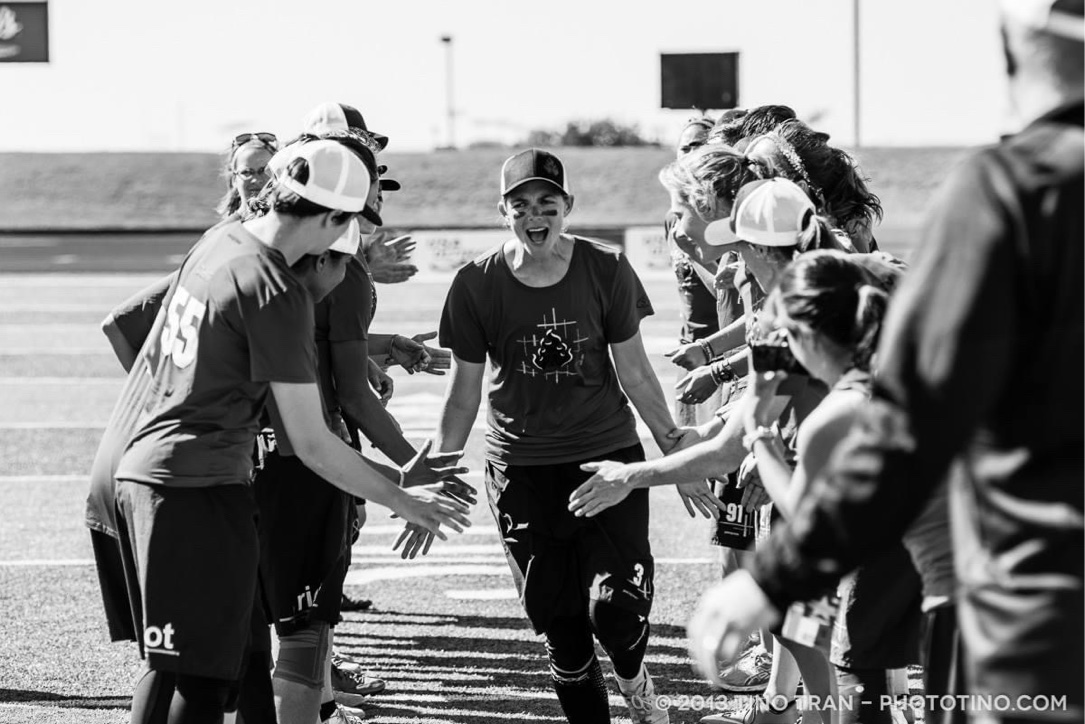 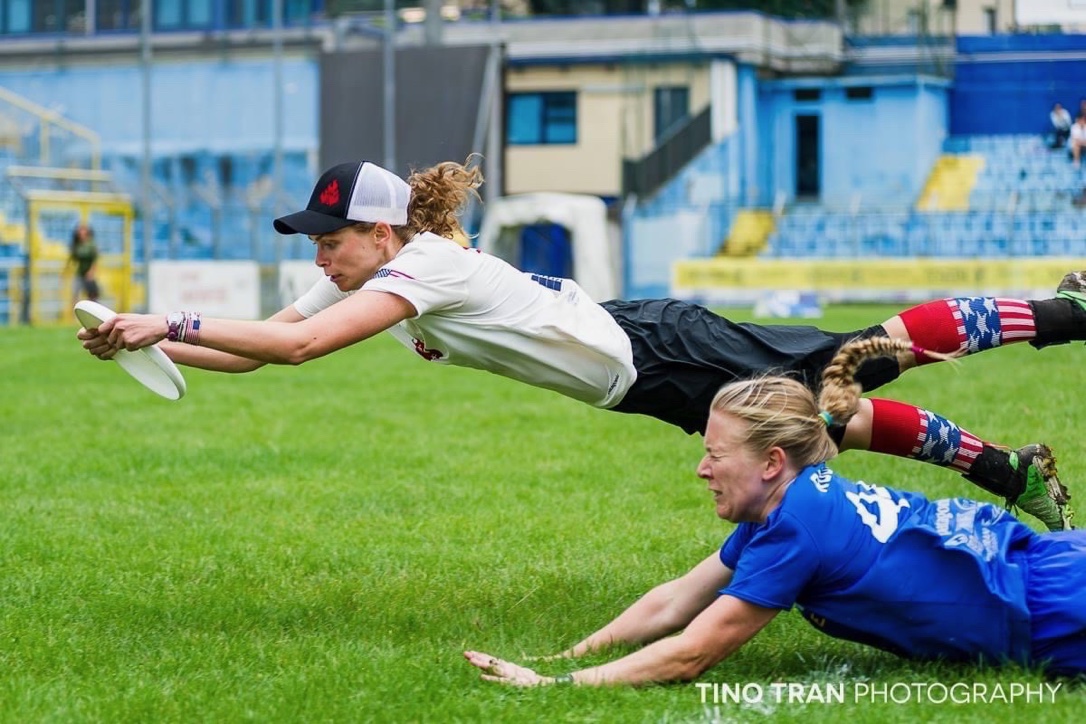 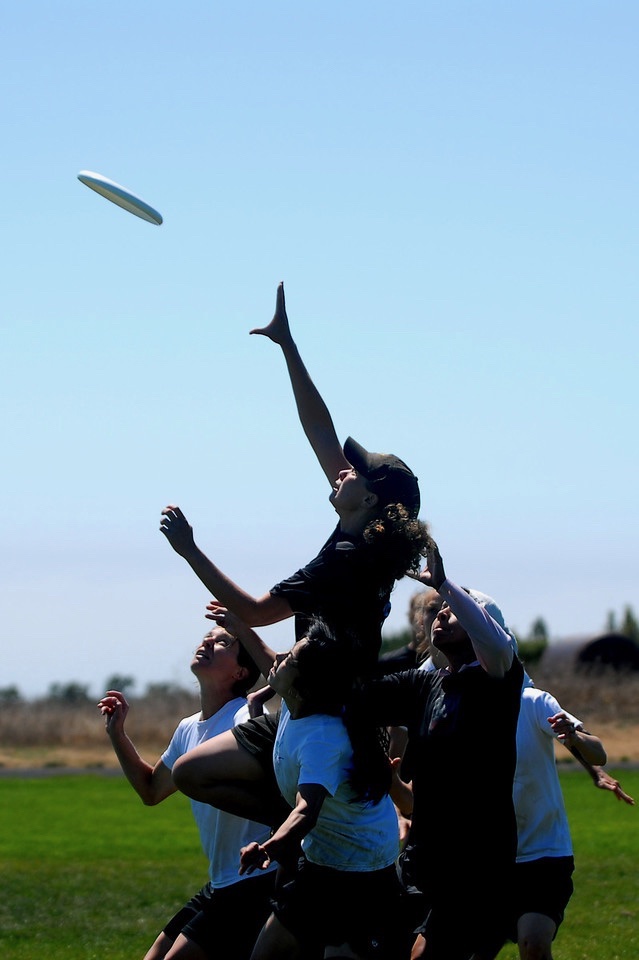 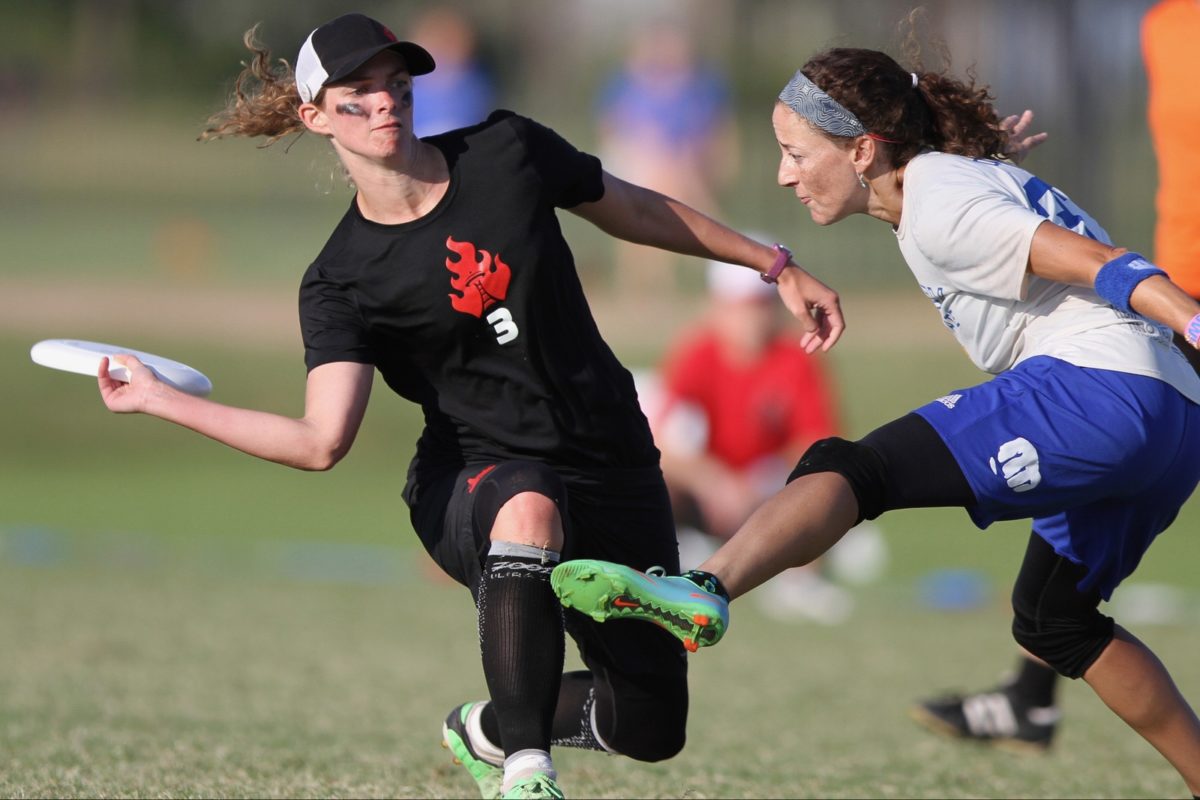 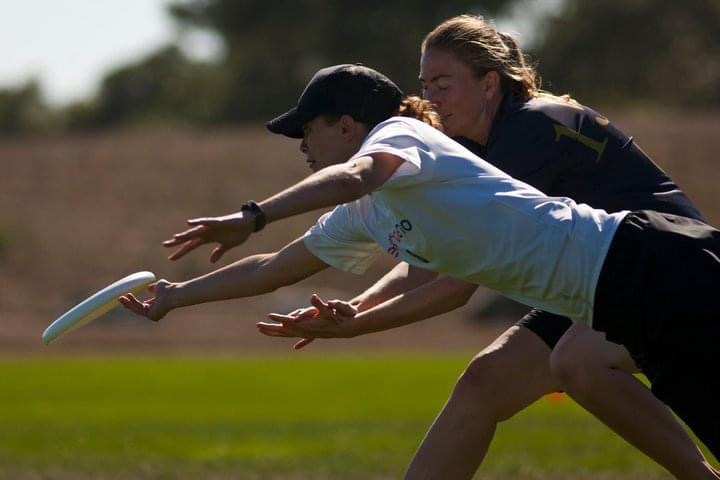 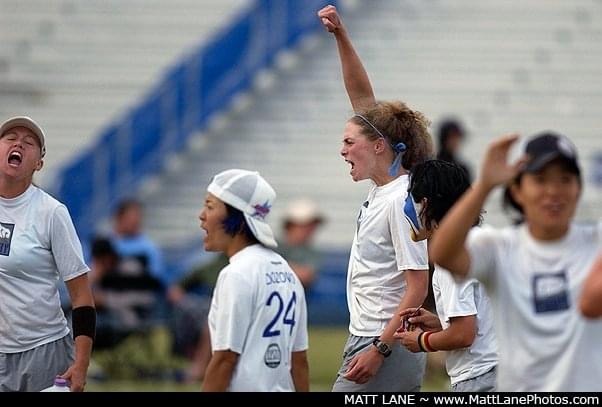 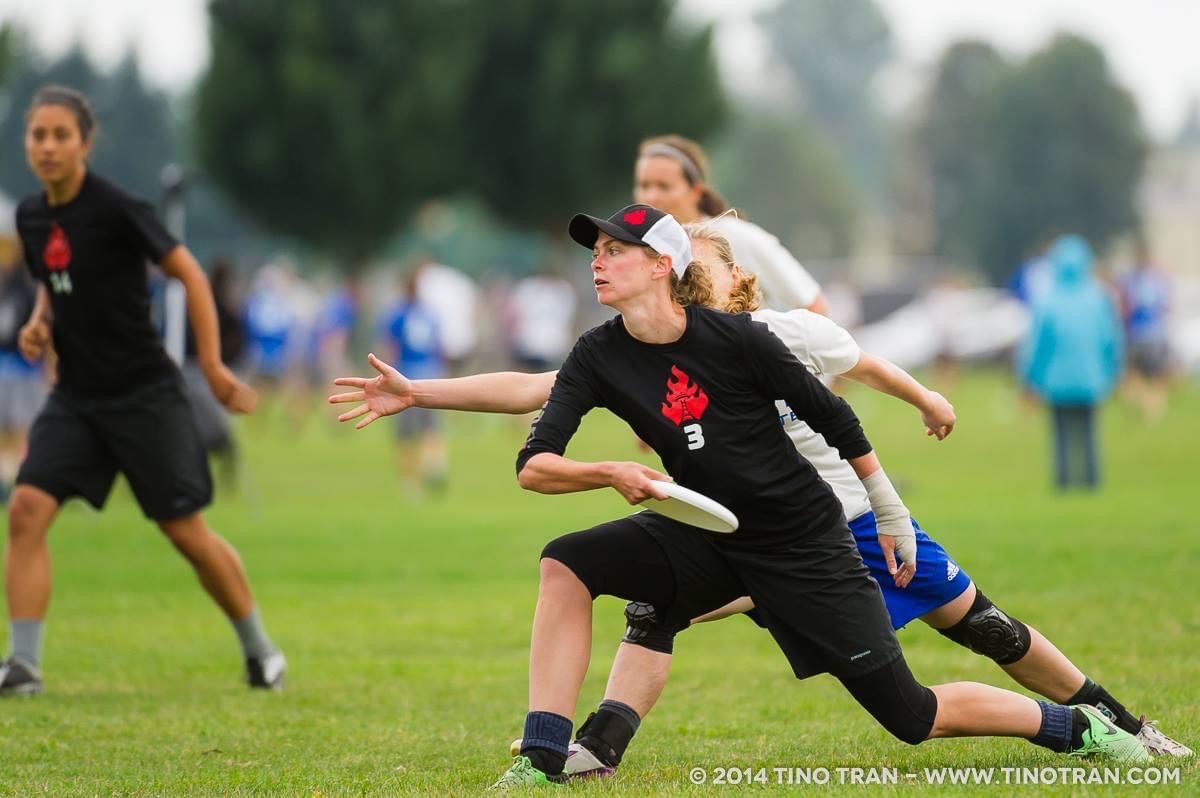 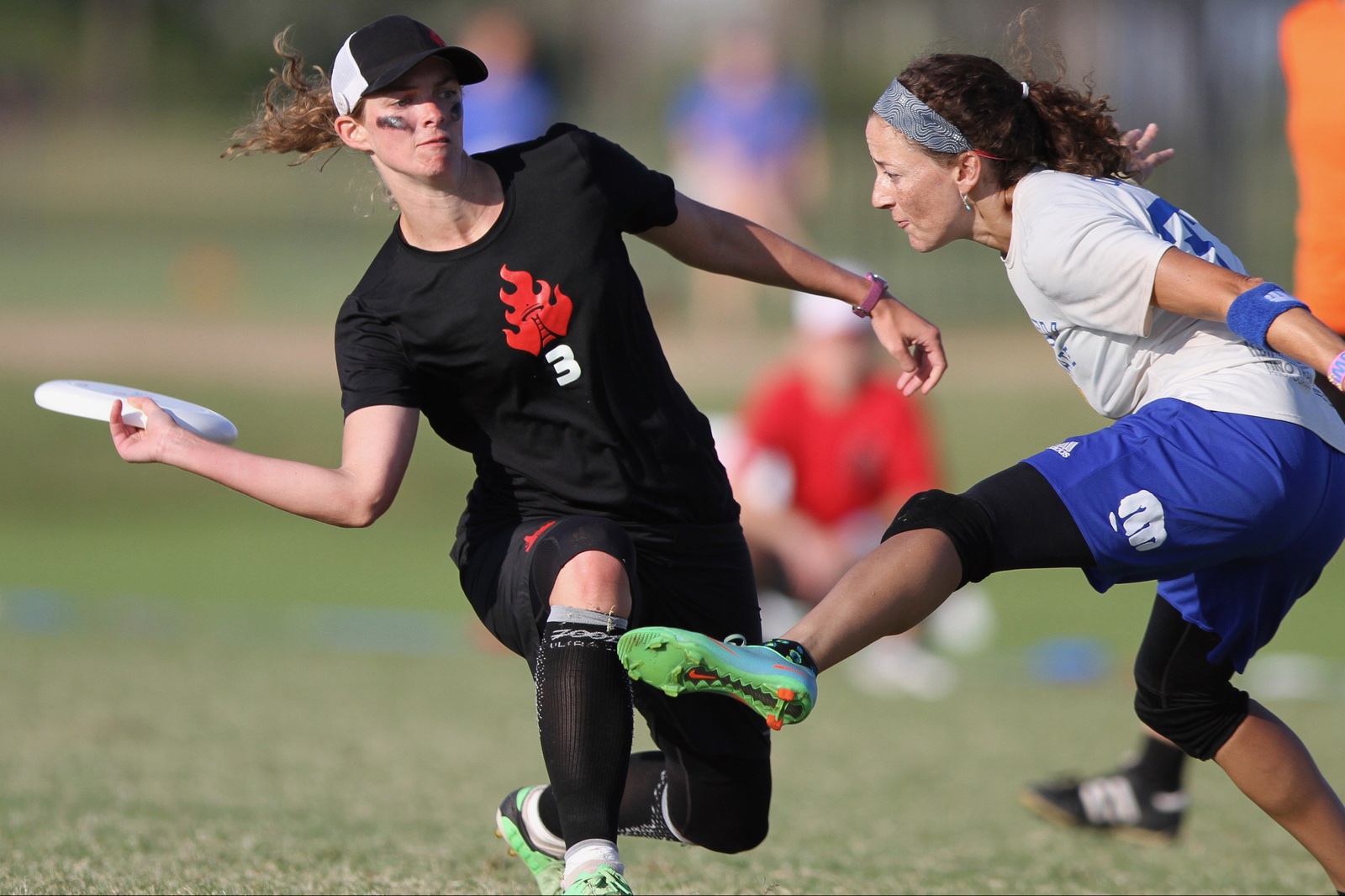 I live in Seattle with my husband, Will Henry, and our two children. With my background in public health, I work as a researcher designing and running clinical trials. I enjoy reading science fiction, trying to keep plants alive in the garden, and spending time in the outdoors with our friends and family.

Over the years on Fury and Riot, I played a variety of positions on the field. My primary roles were as an initiating cutter, offensive handler, and deep defender.

Please describe your major accomplishments - both as a teammate and individual:

I was (and continue to be) a leader on every team with which I’ve been involved, setting up the team for success.

I captained my college team for two seasons, leading Stanford Superfly to the finals both years – culminating with the 2003 national championship in my senior year. That fall, I contributed to Fury’s national title and was selected as captain for the team the following year, leading Fury to its first WFDF medal with a bronze at WUGC 2004. I was also part of Fury’s strategy committee for the 2006 and 2007 championship teams. I then captained the team in 2008 when Fury pulled off the elusive double-peak to win Worlds and a national title, earning the team spirit award at Nationals along the way. With Fury, we finished as a semi-finalist twice, finalist once, and national champion four times and was a major contributor to establishing Fury as the dominant team in the division for years.

Of the 7 years I played with Riot, I was co-captain for 5 seasons—three of which were as captain-coach. I led the team to four semi-finals finishes and three finals at Nationals in that stretch. I also captained the team to a WUCC gold medal in 2014. While playing with Riot, I won the Kathy Pufahl award and was voted as the women’s division Club MVP in 2011.

After retiring from playing club in 2015, I went on to coach Riot and continue to be the team’s head coach today. As a coach, I’ve helped Riot continue its competitive legacy, notching another finals and semifinals appearance at Nationals. Between playing and coaching, I have been at the helm of Riot for 13 years in a row, contributing to the sustained success of one of the top teams in the women’s division this millennium. One of my proudest accomplishments as a coach was Riot’s WUCC gold medal in 2018. Other top coaching successes include as co-coach of Stanford Superfly during its 2005 and 2006 title runs.

Please explain why you stood out among the elite players of your time. What was it that you did best or were known for?

I was probably best known for being a dominating presence in the deep space. My height and speed allowed me to play deep deep aggressively in zone defenses, a critical aspect to Fury’s zone where there was no short deep behind the four-person cup.

On offense, my ability in the air made me a formidable deep threat, but with the disc in my hands, my arsenal of throws was an equally powerful weapon—a challenging prospect for defenders to contain, especially in horizontal offenses that isolated cutters going deep for my hucks. My throws and poise helped me to be a stalwart in zone offenses too.

Leadership was another hallmark of my game as I helped contribute to the strategies that led to our teams’ successes. For example, from 2010-2012 when Riot didn’t have a non-playing coach, I shouldered the load of designing and running practices, helping with line calling and subbing, setting team strategy and making in-game adjustments—all while being a top player on the field. I was able to consistently performed my best on the biggest stages.

I was a primary look in the cutting space for Fury’s horizontal offense during the 2006-2008 championship seasons. Notably, I was a critical player for Fury’s historic come-back win in the 2008 finals of Nationals as I earned numerous deep blocks in the zone that helped enable Fury to overcome a 1-10 deficit to win 15-12.

What year was the peak of your career? During which years were you competing as the top player/highest achieving athlete on your team? If you continued playing after your peak years, how did your role change? In what year did you stop playing at the top competitive level?

The peak of my career could be considered 2006-2009 where I was playing as a top initiating cutter driving the offense downfield on Fury and Riot. In 2010, I transitioned into the handling space to fill a void in that position on Riot. From then until club retirement in 2015, I remained a critical performer as a go-to offensive handler. As an example of my impact even at the tail end of my career on Riot, I tallied four goals and an assist in both the finals of 2014 WUCC and the semi-finals of the 2015 Nationals with wins over Fury.

I believe that I left a significant mark on my teams and the sport overall. I was a critical part of my teams’ many successes, both with my play and strategic insights. On the field, I consistently was matched up with top players on the other team and scouting reports had to consider ways to minimize my impact in the game plan. Within the ultimate community, my name recognition continues among players today which is both an honor and a testament to the impact I’ve made over the many years of my playing and coaching career.

I served as a Regional Coordinator from 2004-2006 for the North West (NW) women’s college division and 2006-2009 for the NW women’s club division. I was on the UPA/USA Ultimate Board of Directors from 2009-2014, as Vice President for five years. I volunteered on the Disc Standards Committee and was a member of the Flight Test Pool testing and approving new candidate discs for the sport. I was also elected to serve a two-year term on the WFDF Athlete’s Commission from 2014-2015.

More locally, I founded DiscNW’s Winter Wonder League in 2012 as a draft league that brought together women-matching players in the area. We grew the league from four to 16 teams during my tenure running it over five winters.

I’ve also volunteered extensively as a coach. In the college division, I co-coached Stanford Superfly in the 2005, 2006, and 2009 seasons and the Whitman Sweets in 2017. In club, I’ve has been coaching Riot since 2016 and helped the team qualify for its 20th Nationals in 2021.

Have the you made other contributions to the development of Ultimate?

Throughout my career, I’ve been a fierce advocate for gender equity. Starting in the days of rec.sport.disc, I worked to ensure online coverage of the sport adequately included the women’s division.

From 2004 to 2006, I almost single-handedly created all the content on Inside College Ultimate for three seasons worth of team bios, tournament preview and recap articles, and opinion pieces covering the women’s division.

In every role I’ve played in the sport, working towards gender equity has been a top priority for me.

Please list any non-ultimate related honors or achievements that may be relevant:

None. There’s a life outside of ultimate? 😉

Anything else you would like the ultimate community know or consider?

I fell deeply in love with the sport when I was introduced to it in college. For everything I’ve invested into ultimate over the years, I’ve been repaid many times over in the amazing experiences and people I’ve met—including my husband and best friends. I am forever grateful that I was fortunate enough to play alongside and learn from so many great players and coaches while being part of the best teams around. Any recognition of individual accomplishments truly is because of the stellar programs that Stanford Superfly, Fury, and Riot have built over the years. 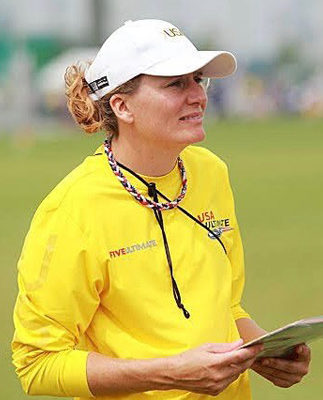 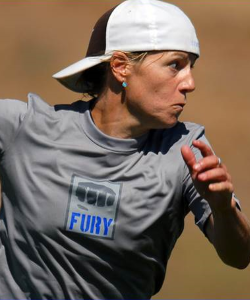 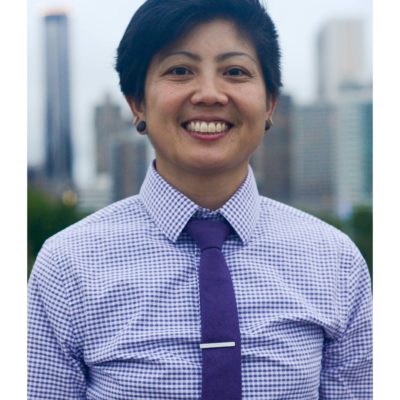 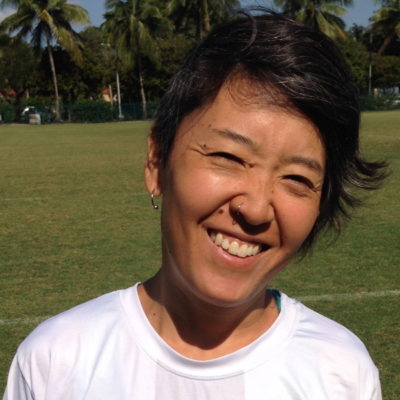