Skip Kuhn was a standout, two-way star on NYNY from the beginning of their victory ride until the end, throwing the final goal to end the NYNY dynasty. His early years anchoring his high school team CRUD, the Atomic Dogs of SUNY Purchase and later Life B4 Plastic, prepared him to fill a pivotal role among many marquee players on NYNY. With excellent handling skills, blazing speed, tremendous jumping ability and  high intensity in every big game, Skip was one of the few players used interchangeably on offense and defense. He’s acknowledged by many of his NYNY teammates as the best all-around player on New York’s star-studded roster. One example was the pivotal role Skip played executing NYNY’s pull play. Often the opposing players would know and communicate that Skip was going to be the first cut to begin the play, and still he would get open. Uncharacteristically for a guy his size, he played deep in the zone, relying on timing and athleticism. Skip ran circles around defenders on offense and was a menace to great offensive players while playing defense. Not usually loud or boisterous, he brought focus and consistency to NY throughout his career, rarely missing a practice. Skip was a formidable competitor; he’s widely respected by his peers and teammates as an athlete who thrived for years at the very top of the game. A lifetime member of the UPA/USAU, Skip continues to play summer league and compete in the grandmasters and great grandmasters divisions, and he also coaches at The Bronx High School of Science. 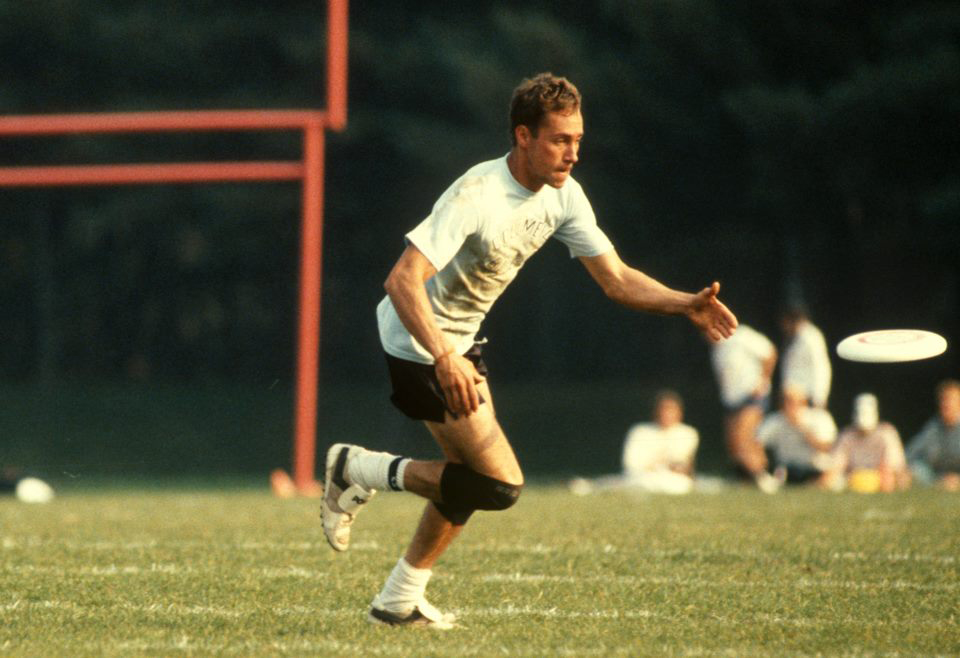 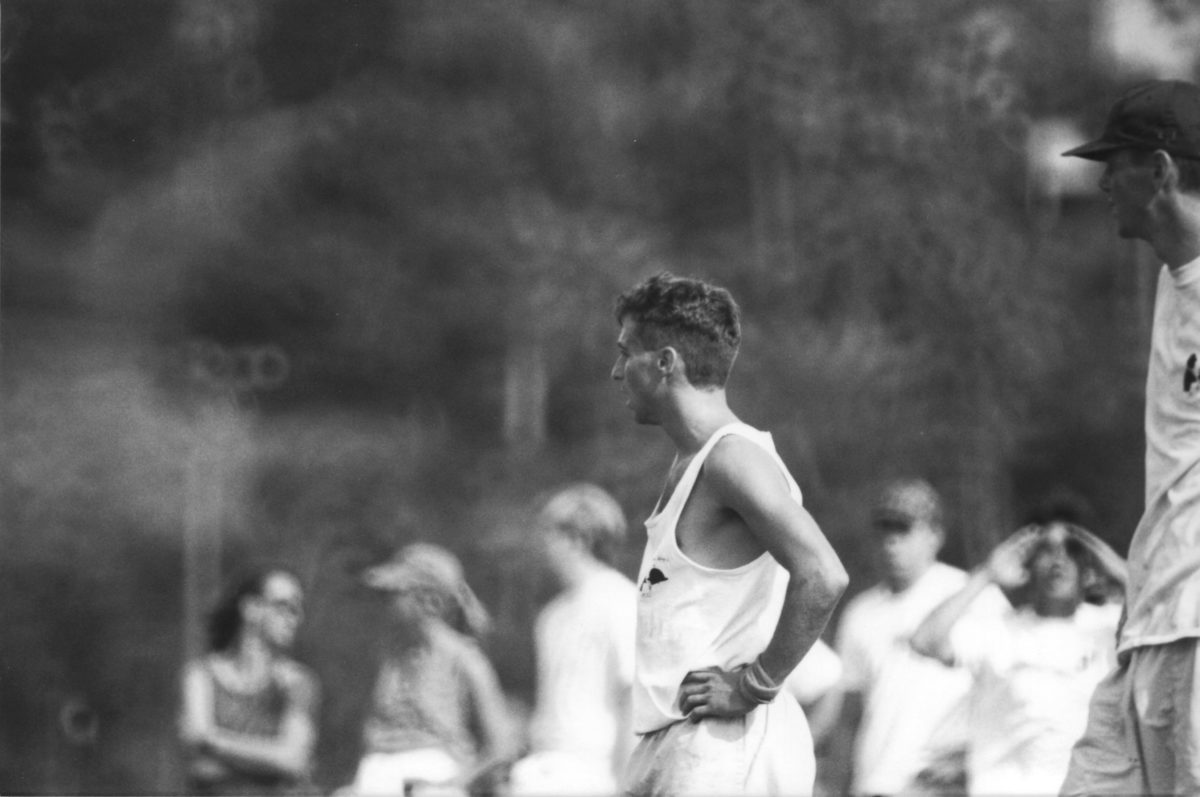 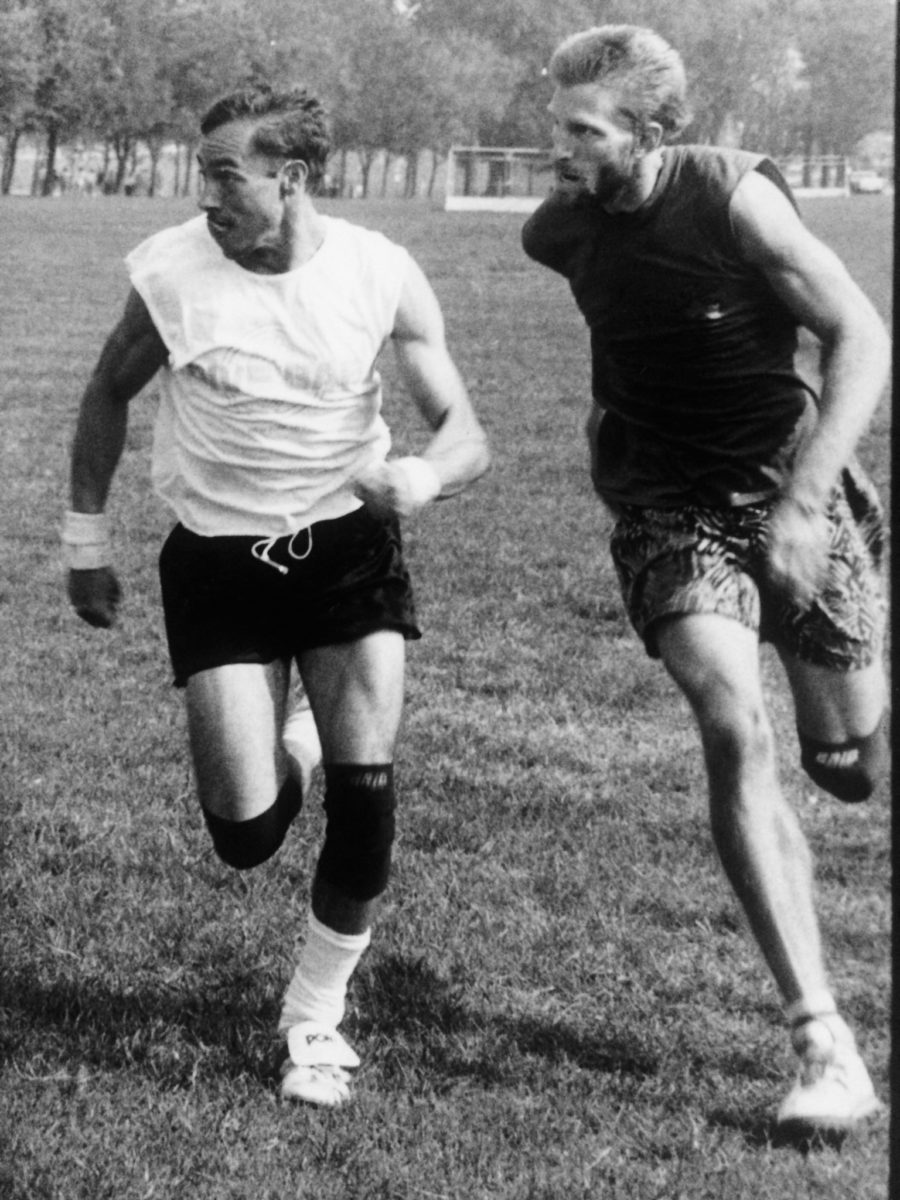 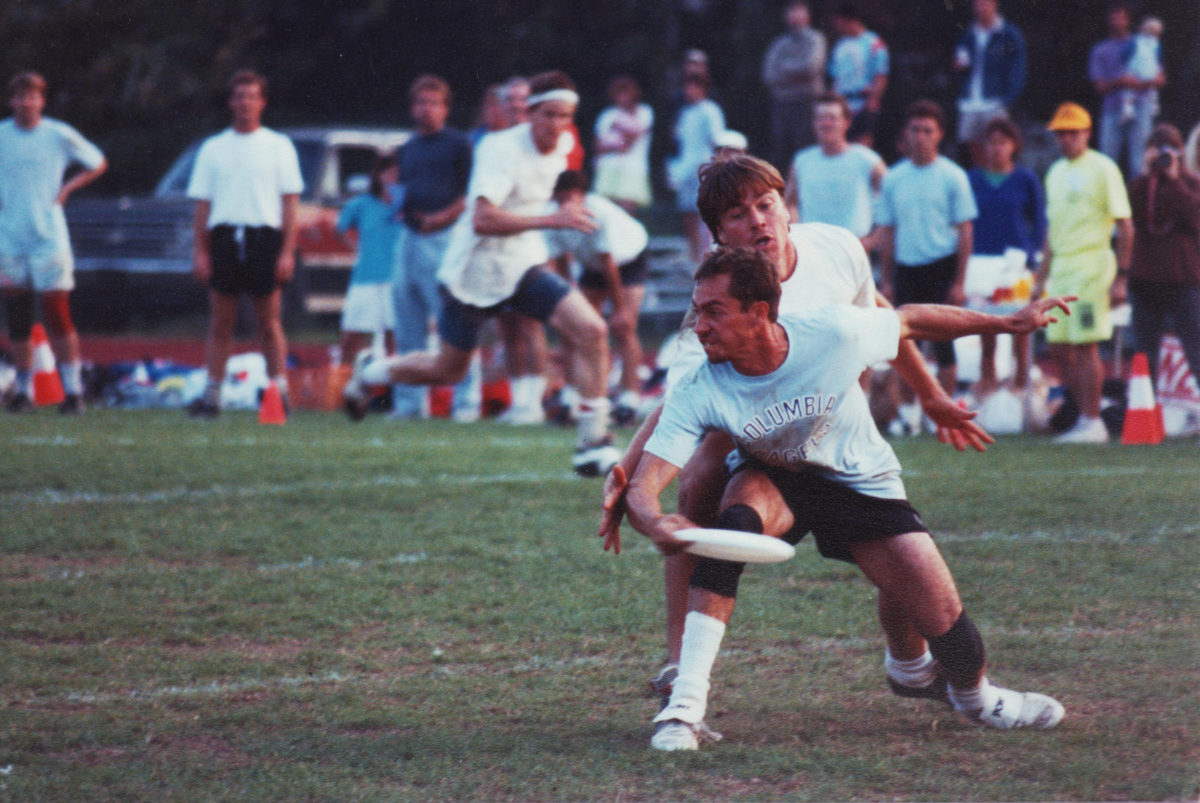 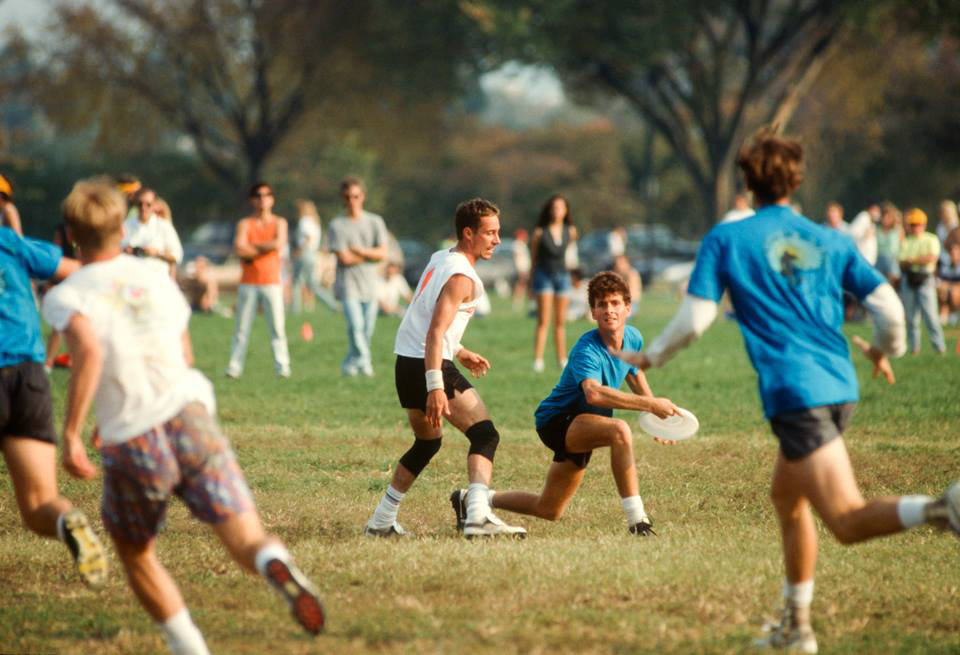 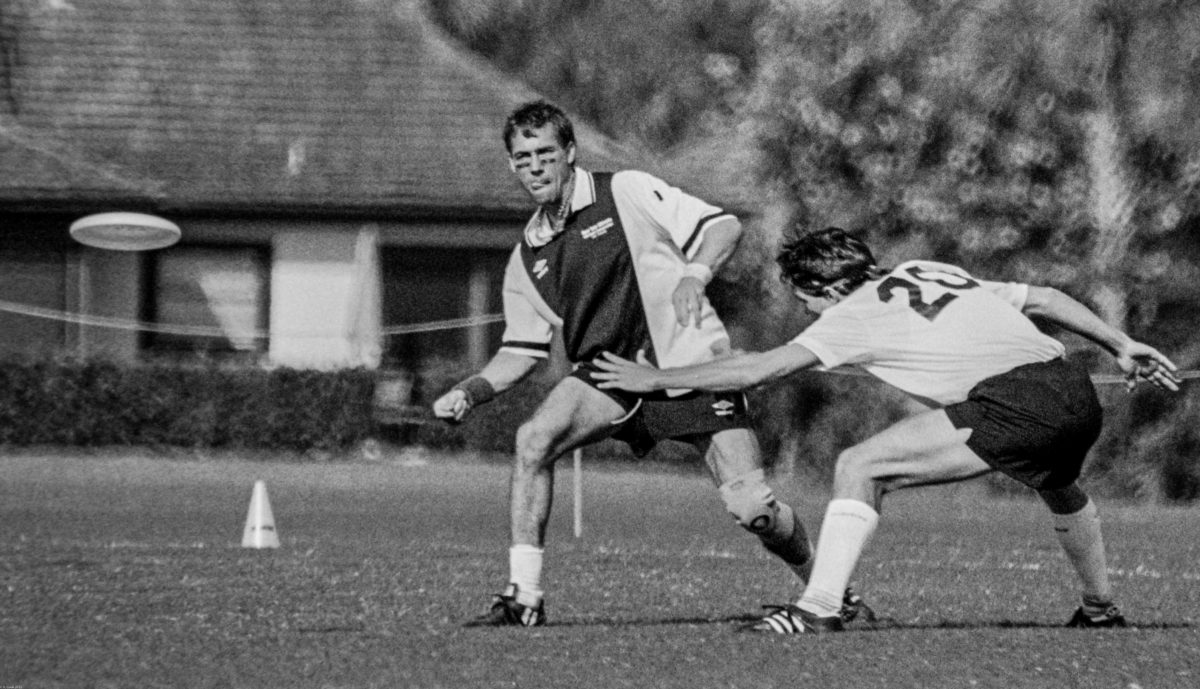 I was a handler mostly, yet I started my career with NYNY as a defender, and eventually switched to offense where I played all positions to keep the defense honest. I played deep in zone defense.

A major accomplishment for me was earning the respect and confidence of my NYNY teammates. Another accomplishment was my involvement in executing the pull play, a significant part of of NYNY’s success. I would say an individual success was to have been able able to compete at the highest level for a long time with many different players and teams.

1983 Middletown CT with the Greenwich Dukes vs B.A.D. My CRUD teammate Dave Coats got a block and the Duke players informed us “That was a block against Jim Herrick!”

1987 Fool’s Fest in Lawrence, Kansas. The Atomic Dogs defeat the Tunas while wearing thrift shop dresses. Amazing party, where else? A barn in a cornfield.

1987 Nationals Miami vs Windy City. After I threw a breakmark backhand for a goal, Karim Basta pounded my chest and said,”That’s what you need to do!” Then, later that night, when I finally madeit to the tournament party in the hotel, Eddie O’Malley said to me, “You’re a National Champion”. Those Windy City guys did have a lot of class!

1988 WUGG’s in Leuven, semifinals vs Sweden. We were losing when I dropped a pass in the goal. I was sick to my stomach but we pulled it out.

1992 Nationals in Sanford, Fla. I had practiced and played with the team but did not attend nationals. At work, I got pumped when I heard that Bob Deman had dominated in the finals.

1999 Masters Nationals pool play vs a California team. After twice successfully running a four-man pull play, Cliff from LA yelled, “Watch for the pull play watch for Skip” Then, Nevo launched a 50-yard forehand which I caughtat full speed, without breaking stride, in the back corner of the end zone.

2015 My brother Chris told an inquiring childhood friend I have been inducted into the Hall of Fame and Eric asks me to autograph a disc for his nephew Milo, a freshman at Connecticut College. I wrote the following statement: “Read it like a glove Milo and jump early.”

I believe I was able to stand out because on defense I could cover anyone and, on offense, I always got open in the big games. I was committed to being in the best physical condition and was dedicated to improve my throwing skills. I was a dedicated practice player, which showed in my consistency on the field and my reliability in clutch moments.

I thoroughly enjoyed being a “lunch-pail” role player on NYNY. My strong defense and subsequent “Kentucky O” provided more confidence from teammates, which then earned me a slot to the offense where I was the first cut for Weiss, then threw it to Crib or Ken, who then threw it to the othesr for goals.

My peak year was 1993 Madison and then ‘94 Worlds. NYNY’s success in England, in typical come-from-behind fashion, without Pat King and Ken, was very gratifying for me. I continue to play competitively either in WUDI Summer League with the young college guys, or 2015 grand masters and great grandmasters East Hampton.

I am honored to have been selected. I believe it is my high level of throwing skill, craftiness, reliability and longevity. I was able to perform and deliver in big moments throughout my career on a dominant team that raised the level of play in our sport.