Bob DeMan was one of the stars of the dominant NYNY dynasty. Standing 6’4″, Bob was that rare big man whose game was not defined by owning the sky and dominating the end zone, but rather by his keen offensive understanding, smooth graceful movement and powerful breakmark throws. Usually playing the third person in NYNY’s vaunted four-man offensive pull play, Bob’s job was to gain large chunks of yards and then look to throw for the goal. As a member of NYNY, Bob won five consecutive UPA National Championships in the club open division from 1989-1993, along with three WFDF World Championships. Following two more appearances in the semis at UPA Nationals with the New York Cojones, the full breadth of Bob’s talents were revealed when he moved to Texas. Bob’s presence led the Houston Houndz to new heights and into the national forefront, winning Southern Regionals for the first time in 1997, and back-to-back appearances at UPA Nationals in 1997-1998. Bob was an unstoppable offensive force. 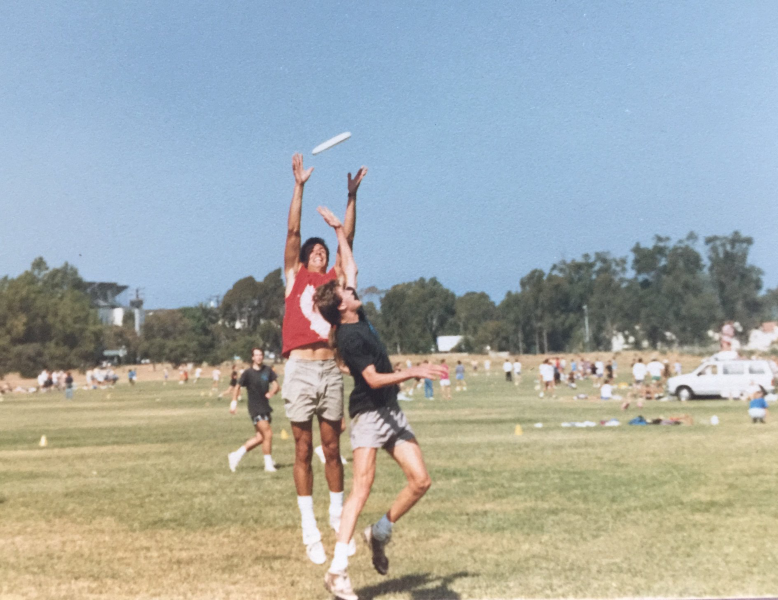 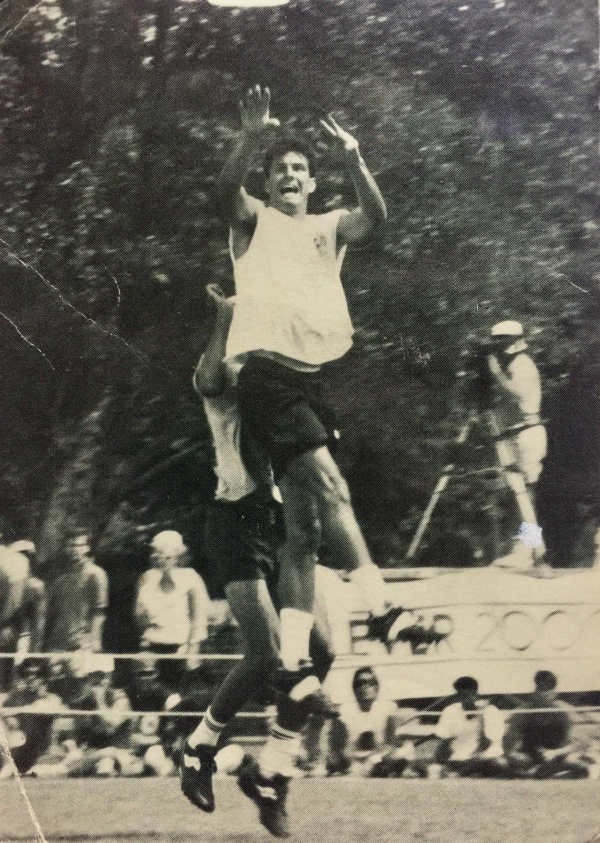 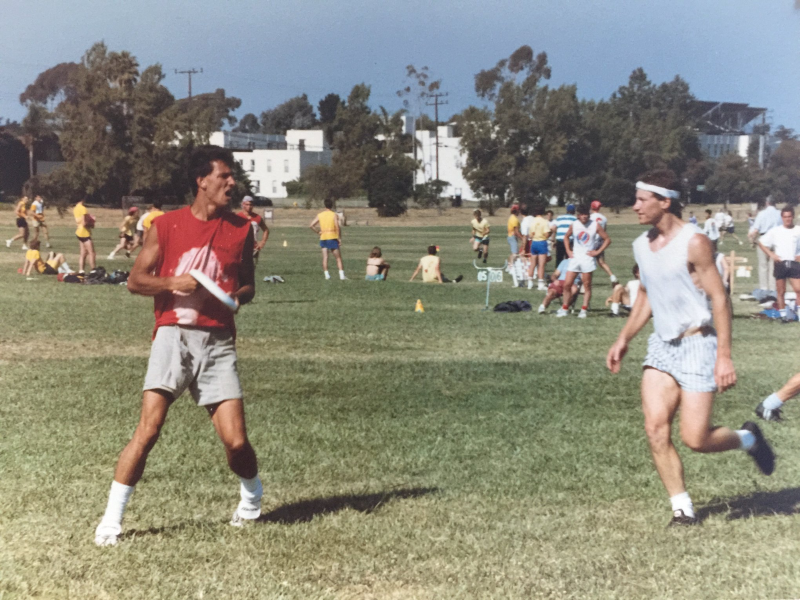 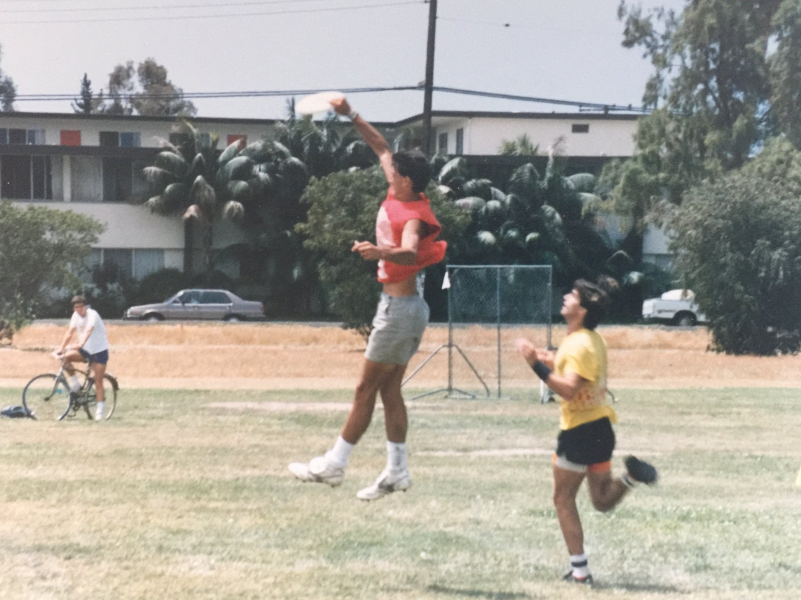 Versus man-to-man defense, NYNY ran a four-man, three-pass play designed to score a goal. I was the third person in the play and my role was to gain large chucks of yardage on cut backs if the defense played behind me, or take it deep if the defense fronted me. A high percentage of NYNY offensive plays resulted in execution whereby passing from 1-2-3-4 resulted in a goal I would throw. Versus zone defenses, I played popper to utilize my throwing skills once the cup was penetrated.

Friends! I never knew when I joined the ECU Irates in 1985 that ultimate would consume my life. The friends I’ve made and the and experiences I’ve had due to ultimate helped shape the person I am today. From Greenville, N.C. to New York City to Houston to Seattle to Japan, I’ve made friends and important relationships. Ultimate even brought me the woman of my dreams. Love you Deb.

I joined an ECU ultimate team in 1985 that concentrated more on winning the party than winning ultimate tournaments. A few years later, this team was just missing out on semifinals in the College Championships, but they hadn’t forgotten how to party. Those guys are the base of my career. My ECU team made it to College Nationals three times.

I’ve participated in 10 open nationals in three regions over 11 seasons. The only season I didn’t make it to nationals was my first of three years playing with the Houston Houndz. But, that was a special season because I had to learn what it takes to get young talented players to overachieve. We made nationals the next two years. Those are some special people from Houston and Austin.

I was honored to be selected by Mike O’Dowd in 1991 to represent the USA on a “Friendship Tour” of Japan. See Mike O’Dowd’s bio on the USA Ultimate website for information on this amazing two week outreach trip.

NYNY dominated from 1989 to 1993. What I did best was play offense; nobody could cover me. I could get off any throw I wanted regardless of the mark. When I had the disc, the receiver was never covered because I could throw a catchable pass anywhere. I never threw the disc away and never dropped it. My team wanted the disc in my hands, as I was extremely confident. When younger players on my team would worry the night before a championship game, I would ask them, “Who is going to cover me!” Even on a team loaded with all-time great players, I was dominant on the field. I was never flashy or flamboyant (we had enough of these types) but I was an unstoppable cog in the machine that won.

In almost every play NYNY ran on offense during its run of five consecutive national championships, I was third in the play. That alone is evidence of how trusted and important an offensive player I was. I was charged with gaining yardage after the pull and finishing the play by throwing the goal. Every defensive player who lined up against me knew what I was about to do and they still couldn’t stop me.

My peak was in 1992. After four years winning almost every tournament we went to, including open nationals and worlds, NYNY was a finely oiled machine and was full of “studs”. Practices were more difficult than tournaments. We could win tournaments when missing any player thought was our best player. In fact, in the Northeast Regionals for Easterns in the spring of 1992, NY Ultimate split into two teams and played each other in the final.

I moved to Houston in 1996 and happened to find ultimate at Rice University. The Houston Houndz was comprised of mostly Rice students, a couple older vets and a contingent from Austin. Houston had never made it to nationals always finishing third in the South Region that sent two teams to nationals. I helped them get to nationals twice and placed fifth in a very satisfying last year with Houston. We beat SF Jam who was confident they were national contenders. My role was still playing offense, but also I mentored the young and talented Rice players. I still relish sitting with the young Houndz after winning the South Region for the first time and “watching” the game to go. The look on the Houndz faces was so satisfying. They simply had to learn how to win.

My last year in ultimate was 1999. I joined three ex-NYNY teammates to play in the Northwest Region. We made nationals but lost in the quarterfinals. I ended my career playing with the same NYNY teammates I started with more than a decade earlier. A great way to end my career.

I was President of the ECU Ultimate Club from 1986-1989. In that time, ECU went from winning the party at ultimate tournaments to winning ultimate tournaments to participating in College Nationals. ECU held and I help plan, organize and run a spring and fall ultimate tournament called Ultimax. Mid-Atlantic and South Region college and club teams regularly attended. In 1988, the ultimate club built the ECU’s Disc Golf course after I secured the capital and land use from the university.